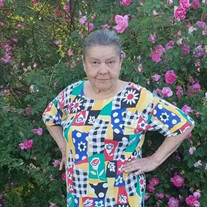 Miguelina Rodriguez, 71, of Waukegan passed away Tuesday, July 31, 2018 at home. She was born May 11, 1947 in Puerto Rico to the late Jose and Clotilde Rivera. Miguelina is survived by her loving husband of 47 years, Jose A. Rodriguez; daughter,... View Obituary & Service Information

The family of Miguelina Rodriguez created this Life Tributes page to make it easy to share your memories.

A comforting word from you means a lot.

Send flowers to the Rodriguez family.