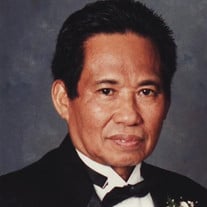 Alexander F. Villanueva Educator, School Administrator Alex was an educator with humble beginnings. He started his career as a school teacher in a very remote village in Botolan, Zambales where the Aetas (aborigines) lived. He taught a combined class of third and fourth graders. On his commute to work, he met Cecilia, a young teacher (from another school) who would regularly get into the same Victory Liner bus at the Maloma, San Felipe, Zambales bus stop. Before long, a romance ensued and they got married. They had four kids and 10 grandchildren. He built his house in San Narciso, Zambales with the help of his brothers, Julius and Raphael. Through hard work and determination, he rose up the ranks to become a school principal, district supervisor and then division supervisor. He also served as commissioner of the Boy Scouts of the Philippines, Ramon Magsaysay Council. Those who knew Alex well saw him not only as an educator but also someone who would strive to be educated. He pursued higher learning. He got his Master’s Degree in Education and eventually finished the academic requirements for the Ph. D. in Developmental Education. All these did not come easily because although he acquired scholarships through pure talent and merits, he had to do a 200-mile commute to Manila from Zambales on weekends to go to school and back home, while he kept his job, and at the same time raised a family. The price to pay to achieve his goals did not come cheaply, but hard work, determination and humility were traits exemplified by him. All these accomplishments so far had to come second to the opportunity to immigrate to America through a petition by his brother Raphael. He came to America in 1989 at the age of 58 to realize the American dream. In three years, he and his equally hard working wife bought their own house in Waukegan, Illinois. This is where they both continued to cherish each other and grew old together up to the end. Alex was a devoted husband, father, and grandfather. He passed away peacefully on November 3, 2015 five days before his 85th birthday, due to complications after a brain surgery. He enjoyed reading, gardening, and most of all…watching his grandchildren grow up. He was greatly loved and will be missed by all. Visitation will be held on Sunday November 8, 2015 from 2:00pm - 6:00pm at The Memorial Chapel of Waukegan, 1521 Washington Street Waukegan, IL 60085, and on Monday November 9, 2015 from 10:00am - 11:00am at St. Anastasia Church, 624 Douglas Avenue, Waukegan, IL 60085. Funeral Mass will begin at 11:00am with Father Victor Quintos officiating. Graveside burial will take place at Ascension Catholic Cemetery, 1920 Buckley Road, Libertyville, IL 60048. Arrangements are under the direction of The Memorial Chapel of Waukegan, please sign our online guestbook at www.thememorialchapelofwaukegan.com for information please call (847) 623-3730.

Alexander F. Villanueva Educator, School Administrator Alex was an educator with humble beginnings. He started his career as a school teacher in a very remote village in Botolan, Zambales where the Aetas (aborigines) lived. He taught a combined... View Obituary & Service Information

The family of Alexander Fran Villanueva created this Life Tributes page to make it easy to share your memories.

A comforting word from you means a lot.

Send flowers to the Villanueva family.